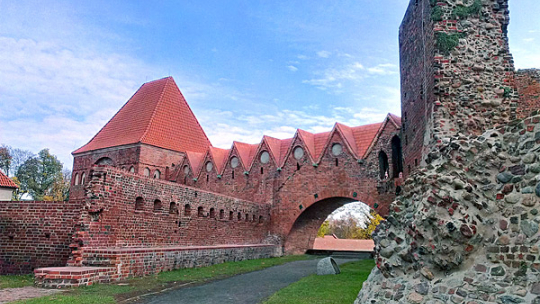 The castle in Toruń is among the oldest  structures of that kind erected by the knights of the Teutonic Order on the right side of the Vistula river. Its construction began in mid 13th century.

The builders used the earthworks of the previously destroyed stronghold which resulted in the peculiar horseshoe shape of the new castle. The castle, initially made of wood, later of brick and stone, was gradually extended until mid-15th century. Together with the outer court which contained the utility buildings and workshops, it occupied an area between the Old Town and the New Town of Toruń.

Situated near the border between Poland and the territory of the Teutonic Order, the castle was of immense strategic importance and was therefore heavily fortified. Behind the high wall surrounding the main castle there was a multi-storey building containing a chapel, a refectory, and the knights' living quarters. The underground vaults of the castle were used as storage space for food supplies necessary in the case of a siege. In the middle of the inner court there was a tall a free-standing defense tower which was to serve as the last point of defense and an observation point from which smoke or fire signals could be produced to warn of imminent danger. Water was supplied by the castle well. In order to avoid contaminating the well, a special tower called Gdanisko was built outside the inner wall, which served both as a toilet and a point from which the castle gates could be defended. 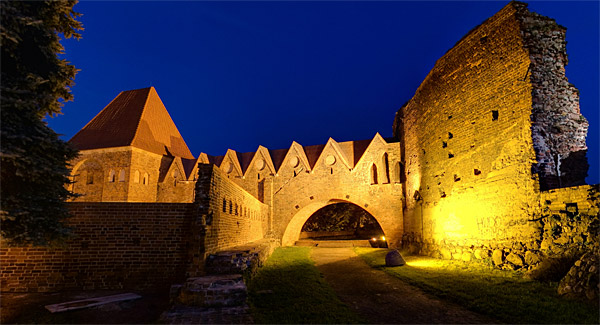 The Toruń castle has never been conquered by invaders. However, it was destroyed by its closest neighbors – the townsfolk of the Old Town of Toruń, who besieged the fortress at the beginning of February 1545. The attack gave a signal for a nationwide uprising led by the Prussian Confederation, an organization established by towns, gentry and knights to protect their rights against lawlessness and power abuse by the monastic state of the Teutonic Order. The citizens of Toruń managed to take the castle and immediately began its systematic and nearly complete demolition. The castle inner court was turned into a municipal rubbish tip which functioned for centuries. It was only in the 1960s that the ruins of the castle were finally unearthed.

Today the layout of the castle is clearly discernible thanks to the outer walls that have been preserved. At the entrance to the inner courtyard and in its central part one can still see the remains of the defense tower which has been blown up. The section of ruins that still stands along the bank of the Vistula river houses the remnants of the knights' living quarters. The best preserved part of the castle is the toilet tower called Gdanisko, which from 16th to 18th century was used as gunpowder storage depot. In the vicinity of the tower stands a watermill once used by the Teutonic knights' and harnessing the stream of Struga Toruńska. The walls of the castle are said to have been a hiding place for a flying dragon, allegedly spotted in Toruń in the summer of 1746. It seems that even then the ruins seemed to be full of mysteries waiting to be uncovered by adventurous explorers. 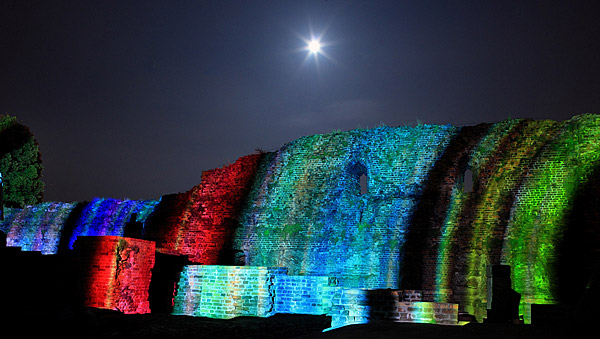 "The outer court adjoined the main castle from the northern part. There were structures built for the Commendator of the Order, together with his chapel and the armoury. A separate arsenal, which was at monastery disposal was located in the main castle. It is likely that at the outer court there was firmaria (infirmeria) or a hospital for ill brethren, and baths. In the second half of 14th century a new structure was erected at the outer court, which was used as a new refectory. A substantial part of the outer court was occupied by accessory buildings, such as a bakery, a brewery, a granary, a coach-house, a stable, a shed, a blacksmith’s shop, an armourer’s shop and other more buildings and warehouses. Although it cannot be exactly estimated when those were built, it is certain than many of the buildings had already existed in 13th century. The structures of the castle mill, located at the Postolsko stream, only slightly above the latrine tower, adjoined the outer court. Until 1262 the city of Toruń received incomes from the mill. It was that year when the city transferred its rights to the mill to the Teutonic Order. In the years 1422-24 The Teutonic Knights built another mill, situated below the latrine tower. From that moment on the old mill was called ‘the upper mill’, and the new one ‘the lower mill’.

The eastern areas of the castle remained under direct supremacy of the Order, functioning as the so-called Castlery. There were sheds for cattle and pigs, and lumber warehouses. There serfs and servants dwelled.

As the castle was built, the Toruń Commandery took its beginnings. According to the newest research, the Commandery exerted control over the lands which were later on transformed into the Commandery of Bierzgłów(1263) and Kowalewo (around 1275); additionally it took also the lands of Elgiszewo and Golub (up to 1254). Initially, the area of the Commandery spread in wide strip along the mid and lower Drwęca river, then along the Vistula river till Czamowo. Later on the Toruń Commandery embraced The Old Town of Toruń together with a village Mokre, The New Town of Toruń, the castle in the Old Toruń together with the grange, the mill and the grange in Lubicz, and the manor houses in Mlewiec and Jedwabno."