The charm and harmony when viewing Toruń from the Vistula river make this panorama one of Toruń symbols and distinctive features. The panorama can be fully admired from the viewpoint in Majdany street, on the left river bank. Here, in the past, was, non-existent at present, bridge, linked with the Bridge Gate on the Old Town side. 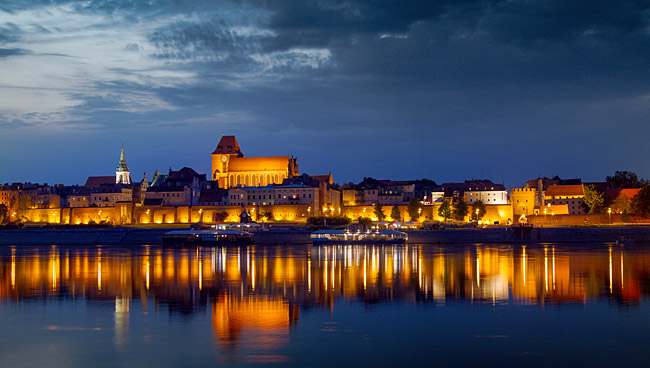 There are two border points marking the most beautiful part of  the Vistula Panorama - two bridges: the road ninety one, named after J. Piłsudski, and the railway bridge, named after E.Malinowski. In between them, on the right bank of the Vistula, there stand the buildings of the Old Town. The specificity of the Toruń Old Town is mainly due to its monumental structures: the cathedral, churches, the Town Hall Tower, tenement houses, and granaries; the remains after the fortification system - gates, towers, defence walls, bastions, the remnants of the Teutonic Castle as well as the  steps of  Philadelphian Boulevard riverside. This place is a popular stroll-lane along the riverside. Toruń panorama gains a special character when watched by night due to the stylish illumination of the most valuable monuments, which are  reflected in the waters of the flowing river.

On admiring the panorama from the viewpoint in Majdany Street, one can see the following, from the west to the east: the road bridge after J. Piłsudski, in the vicinity, in the point of junction, there is a  cofferdam dike, situated  perpendicularly to the bank. Then, a magnificent building The Barracks of Racławice, a collection of gothic and baroque granaries, the Monastic Gate,  a Dovecot Tower, in the interior,  the spires of the Holy Ghost’ church and The Blessed Virgin Mary’s church, the roofs of  Artus' Court, the Town Hall Tower,  the Sailors' Gate, the roof of Dąbski Palace, the St. James' Cathedral (the most magnificent building in the panorama), the eaves of the Eskens' Palace, baroque granaries, the Crane Tower, The Granary hotel (a historical Swedish granary), the Bridge Gate, another granaries, the Guardhouse Tower, the St. Jacob's and St. Catherine's churches, Miners' Warehouse, Minting Bastion, a collection of secession tenement houses. In the end, there is the railway bridge named after E. Malinowski, linked to the railway station "Toruń-Miasto".

Worth to know
On the 4th of December, 1997, during the 21st plenary session of the Committee of the World Heritage UNESCO in Naples, the Old Town Complex of Toruń was inscribed on the List of the UNESCO World Cultural and Natural Heritage.

From the history of the Toruń Vistula riverside
Centuries ago, long before Toruń was founded in its present place, moving along the river bank had been very difficult. In a place of today’s castle moat, there was a valley, which lowered from the area of today’s Ethnographic museum to the Vistula river. In the valley, there flowed the Postolec stream, non-existent today, which sprang from the villages of Wrzosy (Moors) and Mokre(Wet). The second valley, which also led to the Vistula, was situated in the place of today’s car park under the bridge, in the vicinity of the Leaning Tower. Both valleys traced the tracks to the riverside, to the place where people could get across the river. Between the Castle and the present-day puppet theatre ‘Baj Pomorski’, where today is a sport pitch, there was a swamp. The Vistula ended just at the Castle walls, the river bank at that point was very steep. The wall which nowadays runs west of the Bridge Gate stands on the edges of the former Vistula bed.

Until 19th century there was no road, which would enable comfortable transportation along the riverside in other way than on foot. However, even walking could have been troublesome. Whoever walked in that area, must have omitted the deepest and the swampiest parts by entering Świety Jakub and Wola Zamkowa streets. In other words, the Castle was at that time omitted through the road, the parts which today are Ciasna and Rabiańska streets. Another curve which made it possible to pass over the riverside were streets Wielkie Garbary- Szeroka, and further on Szewska street.

When the Teutonic Knights located Toruń in the area of the former market place, in the neighbourhood of Szczytna and Szewska streets, they laid out Szeroka Street as the main trading street in the town. From Szeroka Street they traced Mostowa, Łazienna, and Żeglarka streets leading towards the Vistula. Due to the fact that at the outlets of those streets river bank was high, it was very easy to build foot-bridges in that places. In this way the riverside harbour started to develop. Soon, merchant vessels began to harbour in Toruń, in 18th century even flat-bottomed marine ships visited the town. The reloading of goods was not problematic at all. People traded mainly in wood, grain, and salt. With the passage of time a shipyard and warehouses were erected , as well as a crane, which stood in front of the Monastic Gate (it was reminiscent of the crane in Gdansk). The crane stood there until 18th century. Except for the above-mentioned buildings, there were also baths.

A similar harbour riverside remained up to present, post-war times. When in 19th century a railway was set up on the right river bank, immediately a side-track was created leading from Toruń Miasto railway station to the port. Until ‘70s of 20th century there stood wooden warehouses and a small, electric crane, which reloaded goods from the river barges and other ships onto railway carriages. To improve the traffic, the transportation took place by night, and the inhabitants of Warszawska street were very often woken up by the noise of the carriages entering the station. A locomotive speeded up at the height of the Bridge Gate, but only sometimes it managed to reach the top in the first attempt. In the 70’s the harbour functioning of the riverside was abandoned and the railway track closed down. At the same time, as a part of celebrating the Copernicus anniversary, the Philadelphian Boulevard was being built. In its present condition, it enables the car transit traffic to run along the Vistula river.