Toruń is located at the Trans-European Transport Corridor (the so called corridor VI – TINA) from Gdańsk to Cieszyn and then through Slovakia and the Czech Republic to the Balkans. The national road no. 91 (former no. 1), as well as the A1 motorway surrounding Toruń on the East side are the roads within this corridor. 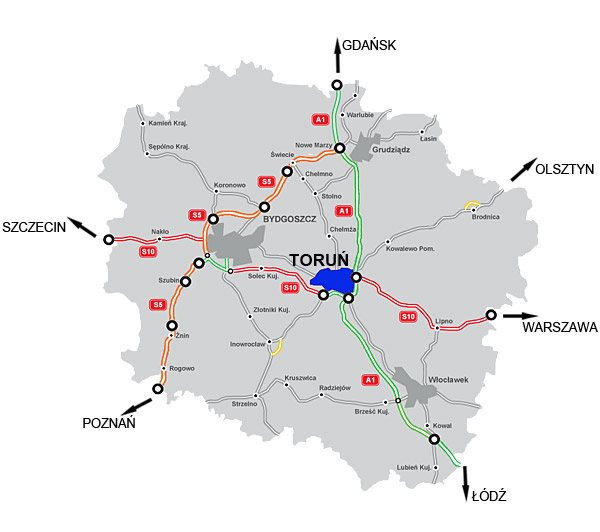 The road system of the city is formed by over 470 kilometres of roads, including over 320 km of communal roads, county roads, voivodeship roads and national roads.

More than 3/4 of the length of roads of Toruń are hardened surface roads – most of them are asphalt roads, some are cobbled with granite setts, cobblestones or have a concrete surface.

Among other roads of the main road system of the city, the following routes should be mentioned: the Lubicka route – linking the city with the Toruń junction of the A1motorway; Olsztyńska, Skłodowskiej-Curie, Żułkiewskiego and Kościuszki, Grudziądzka streets, Bishop Chrapek square, Chełmińska, Krawszewskiego streets – Hoffamann square – Broniewskiego, Polna and Równinna, Okrężna streets; on the left side of the river, the previously mentioned Łódzka, Andersa (the minor bypass road of the city) and the section of the S-10 expressway surrounding Toruń from the South.

It is worth to know, that all roads in the city are supervised by the Municipal Roads Authority in Toruń. Its tasks include planning, construction, reconstruction, repairs, maintenance and protection of roads and road engineering structures.